This is one of the questions asked by budding programmers in many technical forums. Not just for legit purpose, even malware authors used these strategies in their programs to find out whether 32 bit or 64 bit. In this post we going to discuss various ways to determine whether it is 32 bit or 64 bit.

The popular answers are
"The function to call is IsWow64Process. It tells your 32-bit application if it is running on a 64 bit Windows."
According to Microsoft, IsWow64process( ) is to determine the specific process is running under WOW64.

Sample program given by Microsoft:

There is another way to do this via program:
at January 23, 2017 No comments:

Email ThisBlogThis!Share to TwitterShare to FacebookShare to Pinterest
Labels: 32 bit os or 64 bit os, how to find os bit

Michael Jordan was born in 1963, in the slums of Brooklyn, New York.

He had four  siblings and his father's earnings were not sufficient to provide for the whole family.

He grew up in a poor neighbourhood. Exposed to mindless violence and heavy discrimination in the slums, he saw for himself only a hopeless future.

His father saw in Michael, a lost soul and decided to do something.

He gave Michael, who was 13 years old, a piece of used clothing and asked: "What do you think the value of this outfit would be?"

His father asked, "Can you sell it for two dollars? If you can sell it, it would mean that you are a big help to your family."

Jordan nodded his head, "I'll try, but no guarantee that I'll be successful."

Jordan carefully washed the cloth clean. Because they didn't have an iron, to smoothen the cloth, he levelled it with a clothes brush on a flat board, then kept it in the sun to dry. The next day, he brought the clothes to a crowded underground station. After offering it for more than six hours. Jordan finally managed to sell it for $2. He took the two dollar bill and ran home.

After that, everyday he looked for used clothing, washed and ironed it, and sold it in the crowd.

More than ten days later, his father again gave him a piece of used clothing, "Can you think of a way you can sell this for 20 bucks?"

Aghast, Jordan said, "How is it possible? This outfit can only fetch two dollars at the most."

His father replied, "Why don't you try it first? There might be a way."

After breaking his head for a few hours, finally, Jordan got an idea.

He asked for cousin's helpto paint a picture of Donald Duck and Mickey Mouse on the garment. Then he tried to sell it in the school where the children of the rich study.

Soon a housekeeper, who was there to pick his master, bought that outfit for his master. The master was a little boy of only 10 years. He loved it so much and he gave a five dollar tip. 25 dollars was a huge amount for Jordan, the equivalent of a month's salary of his father.

When he got home, his father gave him yet another piece of used clothing, "Are you able to resell it at a price of 200 dollars?" Jordan's eyes lit up.

This time, Jordan accepted the clothes without the slightest doubt. Two months later a popular movie actress from the movie "Charlie's Angels", Farah Fawcett came to New York for her Movie promos. After the press conference, Jordan made his way through the security forces to reach the side of Farah Fawcett and requested her autograph on the piece of clothing. When Fawcett saw this innocent child asking for her autograph, she gladly signed it.

Jordan was shouting very excitedly, "This is a jersey signed by Miss Farah Fawcett, the selling price is 200 dollars!" He auctioned off the clothes, to a businessman for a price of 1,200 dollars!

Upon returning home, his father broke into TEARS and said, "I am amazed that you did it My child! You're really great! "

That night, Jordan slept alongside his father. His father said, "Son, in your experience selling these three pieces of clothing, what did you learn about success?"

His father nodded his head, then shook his head, "What you say is not entirely wrong! But that was not my intention. I just wanted to show you that a piece of used clothing which is worth only a dollar can also be increased in value, Then how about us - living & thinking humans? We may be darker and poorer, but what if we CAN increase our VALUE."

This thought enlightened young Jordan. Even a piece of used clothing could be made dignified, then why not me? There is absolutely no reason to underestimate myself.

From then on, Michael Jordan felt that his future would be beautiful and full of hope.

He went on to become the greatest basketball player of all times.

How can I increase my own value? I am finding it a very interesting thought. I am sure, you too, will.

Who Will Cry When You Die?

Success is ultimate happiness for achiever, but people who trying to achieve success still don't know what is the key to success? If we turn the pages in the historical records of achievers, we see a key rule in all achievers life. The key is persistence. From Prophet Muhammad to Mahatma Gandhi, Edison to Bill Gates, the common part is persistence. Living with a faith or belief is part of normal human being life, persistence differentiate the achievers from normal being. 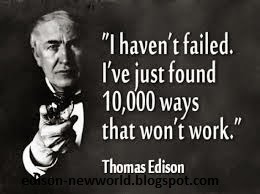 Whatever you are stood for something and want to crack the concept of success, you always need to keep yourself in persistence mood which will revisit you to the hard core feeling that you are one step from the success. Greatest inventions came through from normal people who have the persistence in their mind. Thomas Alva Edison also lead a normal life but end up us greatest inventor of all time. Whenever he fails in an experiment, he iterate the experiment with changes in the mixture or elements until get a successful result.

Take a sample case:
If you are in a journey to learn some concepts. It might be a programming language, art works, sports and martial arts. In this case, I am taking martial arts as case study. We know Bruce Lee very well. He learn each move in wing chun till he perfect and mastering in it. Practice a kick 1000 times to master in it. Same philosophy which we discussing now. Persistence!!!
One time it might go wrong but 1000th time, it will give the fruit of success. Only people with persistence will taste that fruit.