1. Gravitational forces act over greater distances, distorting the fabric of space-time and so they control the motion of planets and stars. Gravity holds the universe together.

2. The electromagnetic force mediates and is responsible for chemical reactions between the elements and the interaction of electrons with the atoms’ nuclei. Magnetic and electrical fields combine to create energies such as light, radio/tv waves, x-rays, UV, ultraviolet and gamma waves. These travel from their point of origin at 3x10^8 m/s or three hundred thousand km per second.

3. The strong nuclear force binds the particles of the nucleus together and acts over a short distance. It works by combing quarks into hadron particles, protons, and neutrons.
This force is 10 to the 38th power, stronger than gravity!!

4. The weak force acts within the nucleus of the atom over extremely short distances, less than the diameter of a proton, and it mediates radioactive decay. For instance, uranium decays spontaneously into the lead.

Cosmologists believe that just prior to the Big Bang, these four forces were combined as one SUPER force. At the instant of creation, these forces split. Now experimental physicists are trying to recombine those forces. If successful, the recombination would replicate the extant conditions at creation. And that, in turn, would provide much insight and understanding into exactly how this universe came to be. 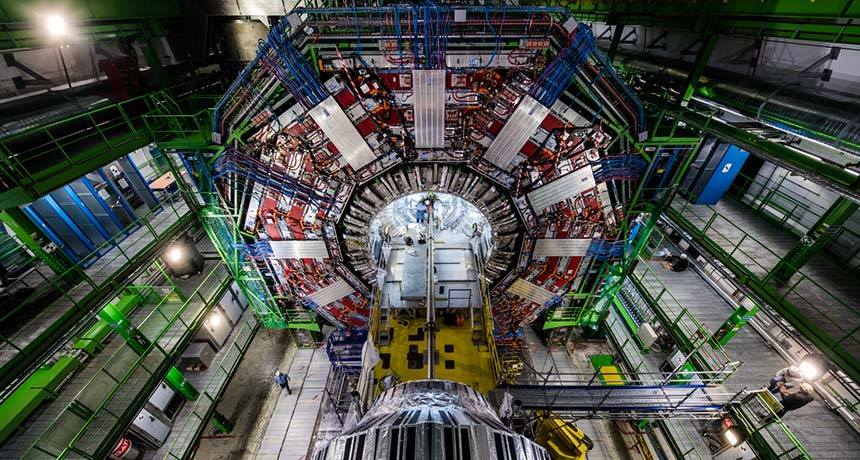 Experiments like these are conducted with atomic accelerators, such as the LHC, the Large Hadron Collider, where protons are accelerated to near the speed of light and smashed into other atoms. The collision produces subatomic particles which give scientists clues to the nature of matter itself.

Einstein was working on a method for combing the four forces at the time of his death. He called the effort, the “Grand Unified Theory”. The equations, which he wrote to explain and to reach this goal, remain on his blackboard to this day. Will we ever achieve Einstein’s dream? Who knows. Uniting the four forces is what some call the “Holy Grail” of science.