Today we spotted malicious app which appears to be like fake Aadhar mobile app. Aadhar is the identity card provided by Indian Government to the Indian citizen, 12 digit unique-identity number issued to all Indian residents based on their biometric and demographic data. It will be linked to bank accounts, and other basic services like telecom (sim card) services, etc. of the citizen of India. Aadhaar is the world's largest biometric ID system, with over 1.19 billion enrolled members as of 30 Nov 2017.

The recent reports asserted that INR 500 (roughly seven USD) via Paytm and details such as name, address, postal code, photo, phone number, and email were retrieved. But authorities denied that the breach allowed access to millions of Aadhaar cardholders' details, saying the search facility is available for the purpose of grievance redressal to designated personnel. After this news hit in the media, supporters of privacy started questioning the security concerns.


We started analysis of this sample in our controlled environment. After extracting the ‘classes.dex’ file from the original application, we converted the dex file to the jar file format for understanding the code.

When we decompiled the code we got the interesting code to view.

This application has the code for most of the Aadhar functionalities such as Biometric related items, barcode reader (it’s part of Aadhar card), notification response, OTP response, and resident profile.

Many people in India do not opt anti-malware solutions for their smartphones. More importantly, the user's awareness can combat these kinds of mobile malware.
at January 21, 2018 No comments:

A recent variant of Locky ransomware comes with an outstanding statement as the point of entry. Spam message comes with the subject as the outstanding statement which contains JavaScript file as customer statement.
File Hash (SHA-256): 381272f158b754bf189dce4f7376fa8573583afa1e6659d0e85934080824f4cd
File Size: 13 KB
We observed the malicious domains contacted by this JavaScript file.

We also observed the variants in the domain extension: 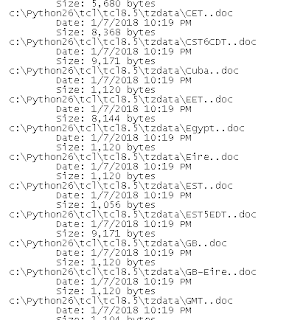 A large number of files created and it is the behavior of ransomware file that modifies other files in the system. We found ‘..doc’ extension in all the encrypted files. That read_me.html file is a ransomware note contains details of payment method and tor link. The below snapshot is the details of the readme HTML:

File extension added by this variant of ransomware:
‘..doc’