People with rudimentary knowledge in astrophysics know the stars are formed gases and nuclear fusion in the core creates the energy. Our sun has enough mass and ignited nuclear fusion in the core. Apparently, the sun got more than 99% mass of our solar system. Even though Jupiter is 2.5 times as massive as all the other planets in the solar system combined, sadly it's still not big enough. If the gas giant had approximately 80 times more, it would have been able to achieve enough mass to ignite nuclear fusion in its core, which by the way, is still radiating heat left from the time of its formation. 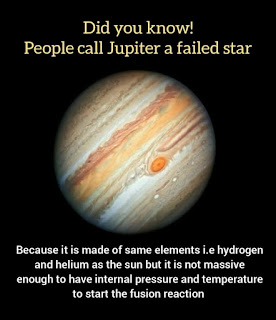 Not to mention, Jupiter really gives a strong competition to our Sun. Containing approximately 90% hydrogen and 10% helium, which is quite similar to our sun's atmosphere containing 75% hydrogen and 25% Helium, it also has the strongest planetary magnetic field in the solar system, second only to the sun. If that was not enough, the planet can sometimes even produce more powerful radio signals than the sun. With almost 79 moons, each unique in its own way, our Jupiter harbors its own version of the solar system, kind of like a sun to its moons. Also, like a true Star, our Jupiter has a kind heart, emitting more energy than what it receives from the sun and taking care of its fellow planets by serving as a dumping ground for our solar system. Its gravity field sucks in a few percentages of potentially harmful asteroids to save us. With good skills and a big heart, Jupiter came real close to becoming a Star, sadly it couldn't be one.

Email ThisBlogThis!Share to TwitterShare to FacebookShare to Pinterest
Labels: Astrophysics

For example, amazon.com is a legitimate service and used by millions of people for online shopping. A typical squatting campaign for amazon will be looking like "accounts1-apmazon[.]com". We collected various squatting domains targeting popular domains from the exchange threat intelligence (IBM). We shared the list with reference details:

EY Megatrends - Are you reframing your future or is the future reframes you?

EY, big four auditing company, recently kickstarted their lastest thinking with a new business framework called EY Megatrends. The EY Megatrends framework exposes business leaders to trends and forces far outside their usual scope of analysis, reducing the risk of missing out on, or being sidelined by, the “next big thing.” Building your transformation journey in the future, not the current state, has never been more crucial.

EYQ’s first exploration of the primary causes of disruption and the large, transformative trends that are shaping our future.

PDF link: https://assets.ey.com/content/dam/ey-sites/ey-com/en_gl/topics/megatrends/ey-megatrends-2016.pdf
Megatrends 2018:
As more organizations place disruption high on their agenda, our understanding of the forces of disruption and the resulting trends continues to evolve.
PDF link: https://assets.ey.com/content/dam/ey-sites/ey-com/en_gl/topics/megatrends/ey-megatrends-final-onscreen.pdf
Post by
newWorld
at August 16, 2020 No comments: