Election fever is at its peak now in Tamil Nadu. There are lots of opinion polls and surveys conducted by many media. We are getting speculations that those opinion polls are paid one.

Well, it may or may not be. In this post, we will see the vote percentage of major parties in Tamil Nadu at the last elections, which will give fair idea about how this election is going to be. Because, elections in Tamil Nadu is purely on arithmetic and anti incumbency factor. 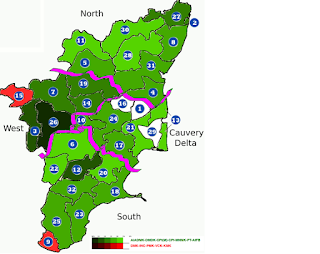 Vote Percentage in 2014 TN:
In spite of Modi wave in the whole India, this is the only state where BJP got only 1 seat out of 39 seats and its alliance PMK got one more seat. Out of 39 seats, Aiadmk won 37 seats with the vote percentage of 44 (i.e. vote of 1.8 crore).
In that election, DMK suffered heavy loss and unable to win a single seat.

Analysis:
It is believed that two factors influenced the win of Aiadmk. One is Multi-corner contest and other is people welfare schemes by  State Government. Dmk was moved out of INC and stated that they realized bitterness of INC. Dmk with the support of VC and some other minor parties, they faced the election. They able to gain only 27% of vote (by that alliance). INC got only 4.3% votes.
BJP team (Dmdk+Mdmk+PMK) able to gain only 18.5% of vote.

DMK and INC alliance made up a social media negative image via funny memes and reality, they were sharing the table for Srilankan Tamils genocide. Now INC is a weaker party in Tamil Nadu. Half of its party is with GK Vasan (they are in PWF- People welfare front).

Dmk missed out VC this time and added weak INC in. More or less, it is a same equation like last time. The only unchanged side is Aiadmk. Lets see our prediction is right or wrong on may 19.